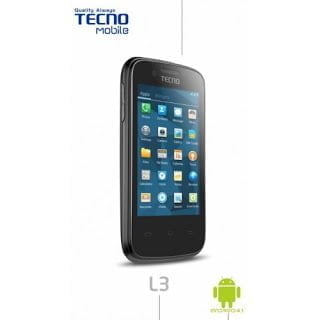 Tecno is here again with the L series set of their android smartphone. The phone is known as Tecno L3 android smart phone. In Nigeria, kenya and ghana tecno products are growing at a rapid speed beating other class of mobile devices like samsung galaxy series, Htc and Lg android phone as one of the top seller because their products are cheap and also nice to handle like the samsung series, Htc smart phones.

The tecno L3 mobile phone  is the first smart phone in the L series made by tecno and is running on google android operating system Android 4.1 jelly bean, I GHz single core CPU, smart display of 3.5 inches touchscreen with a 5 mega pixels camera with LED flash. The android tablet is having dual camera of 3 mega pixels rear camera with flash and 0.2 mega pixels front facing camera for video calling. The tecno L3  smartphone could have been a nice mobile phone expect the poor ram of 512MB and at these time we have strong tech gadgets they still produce phone with 3MP camera quality. If tecno mobile can improve this tecno L3, then we have a great smartphone to run the various high tech apps and games out there.

BBM for Android is here before September ends

FREE VPN: Opera lets You Have Its Free and Unlimited VPN for Android