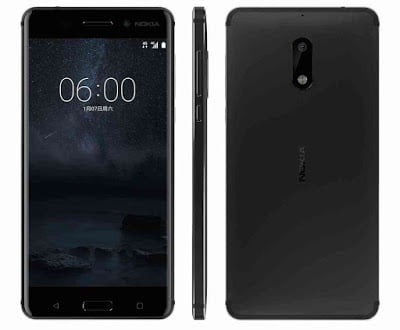 The Nokia 6, is the company’s first ever android smartphone, developed by HMD Global is now launched exclusively for China, interestingly the price and specs of Nokia 6 is on the company’s mid-range phone and the first ever to be released in 2017. Nokia 6 comes with 5.5 inch Full HD display and packs over 6000 series aluminium with additional features that will have you consider switching your current device.

Nokia 6 features 64-bit Octa-Core 2.0 GHz processor, supported with 4GB ram, 64GB of internal storage which can be expanded to 128GB via sd card, with a cutting edge 5.5-inch Full HD Display, 1080 pixels resolution with a curved 2.5D Gorilla Glass.
The Nokia 6 device also sports a 16-megapixel rear camera with flash, while on the front 8-megapixel front facing camera designed for selfie shots. The mobile device also comes with fingerprint ID while on the battery side it packs non-removable 3000 mAh battery
Powered by latest Google OS 7.0 Nougat out of box, it will be available in several colors like silver ash,white, Black and Gold.