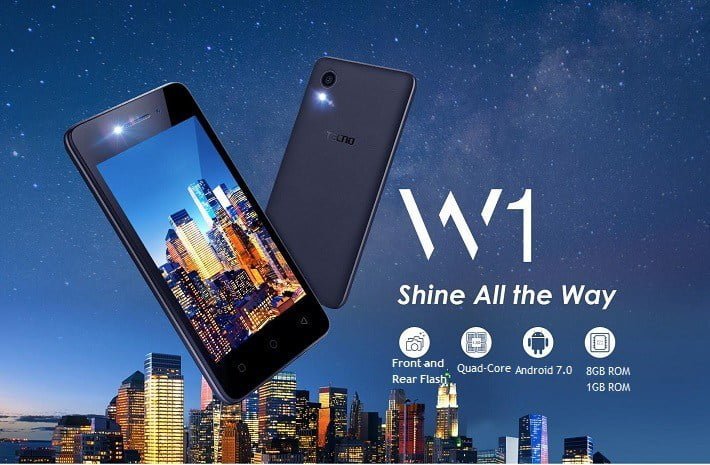 The Tecno W1, is now another addition for low budget series of smartphones after the successful launch of Tecno Camon CX Air and Camon CX mobile phones which are both taking over from the famous Tecno C9 device is finally here.

The Tecno W1 is released by Tecno mobile just few hours and be available in stores nationwide. The cellphone is powered by 4.0 inch display, powerful 4G LTE capacity.

The android 7 phone is a low camera first focused with a tiny 2 megapixels, back and 2 megapixels front facing camera for selfies.

Coming with a tiny battery capacity of 1800mAh the device is sure to last for few hrs on a single charge, loaded with a 1GB RAM and 8 GB internal storage, This Tecno W1 gadget will definitely not have me swap for a try.

Pre-loaded the latest Android 7 Nougat + HiOS 2, The mobile phone has a Dual sim functionality with full 4G LTE support, which is very easy for internet connectivity. it will be up for sale come April 2017.

What Do You Think About Infinix Edge? Coming Soon!

Welcome 9Mobile!! – Say a Big Goodbye to Etisalat As We Know It.